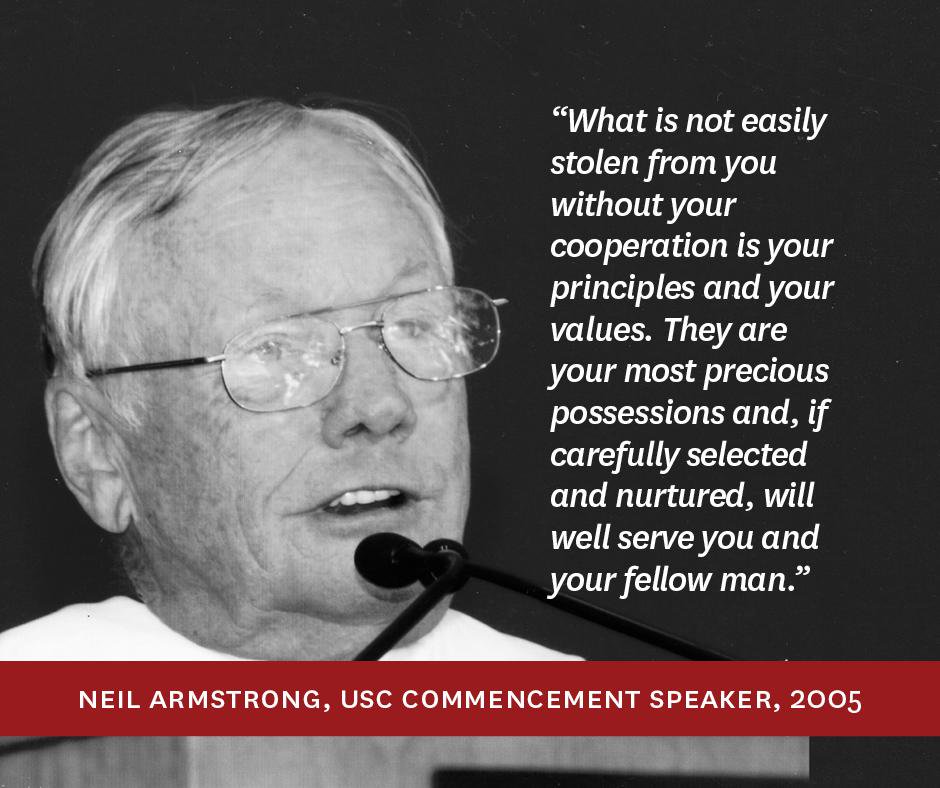 President Sample, Members of the Board of Trustees, Honorary Degree Recipients, Distinguished Guests, Members of the Faculty, USC Family and Friends, and, most importantly, Members of the Class of 2005: It is generally accepted that Heinrich Schliemann, in opposition to conventional wisdom, believed that the ancient city of Troy could be found by following the clues in Homer’s mythical Iliad. Herr Schliemann’s assumptions proved to be sufficiently factual and he discovered the ruins of Troy about the time of the American Civil War.

Subsequent archaeological expeditions revealed that, in fact, there were actually nine cities of Troy, each built atop the ruins of the previous community. Rejecting the precedent of building over old ruins, a 10th Troy was established at a new location overlooking the Pacific shores of the Southern California coast, where a new institution was created with the objective of providing the apex of scholarly inquiry and providing the ultimate opportunity for superior learning.

Today, we gather to honor Trojans who have participated in this learning process and have reached varying but defined achievement goals. They will become graduates. This is a joyous day for the graduating students, relieved faculty, thankful parents, and amazed siblings.

A few words to the new graduates: for each of you, this is a very special day, a day for which you have labored for seemingly unending eons.

I hope you have become comfortable with the use of logic, without being deceived into concluding that logic will inevitably lead to the correct conclusion.

In essence, you have embraced thinking. Robert Frost famously remarked: “Thinking isn’t to agree or disagree, that’s voting”. Thinking and a willingness to learn have brought you to this day.

Some of you have come from other lands to study here in this Trojan place. You honor us by choosing this university in this country. We hope your investment here has been fruitful and that friendships nurtured here will endure.

Students of my vintage did not have calculators, cell phones, credit cards, personal computers, the Internet, or reality TV. Some might say they were very fortunate.

At the time of my college graduation, airliners were propelled by – propellers. A few military jets existed and rocket engines were primitive. Had a faculty member, at that time, suggested preparing for a career in spacecraft operations, he or she would have been ridiculed. The most serious proposals for space flight were found on a Sunday evening television program, The Wonderful World of Disney.

But within just three years, the Soviet Union launched the first earth satellite and the Space Age was born. Within a decade, satellites were being used for a variety of scientific and commercial purposes, probes had been sent to nearby planets and humans were frequently flying into space.

I suggest that you cannot imagine the change and related opportunity that will arise for you in the years ahead. Hopefully, the things you have learned will help you be ready for them. And you will not stop learning. Learning is a lifelong process, and you have a great start.

Custom dictates that the commencement speaker give a word of advice to the graduates. I feel a sense of discomfort in that responsibility as it requires more confidence than I possess to assume that my personal convictions deserve your attention.

The single observation I would offer for your consideration is that some things are beyond your control. You can lose your health to illness or accident, you can lose your wealth to all manner of unpredictable sources.

What is not easily stolen from you without your cooperation is your principles and your values. They are your most precious possessions and, if carefully selected and nurtured, will well serve you and your fellow man.

Society’s future will depend on a continuous improvement program on the human character. What will the future bring? I don’t know, but it will be exciting.

The author of “The Little Prince,” Antoine de St. Exupery, was a pilot in World War II which, unfortunately, he did not survive. Fortunately, his writings did survive and I will pass along his advice. In St. Exupery’s “Wisdom of the Sands”, he wrote: “As for the future, your task is not to foresee it, but to enable it.” And so it is.