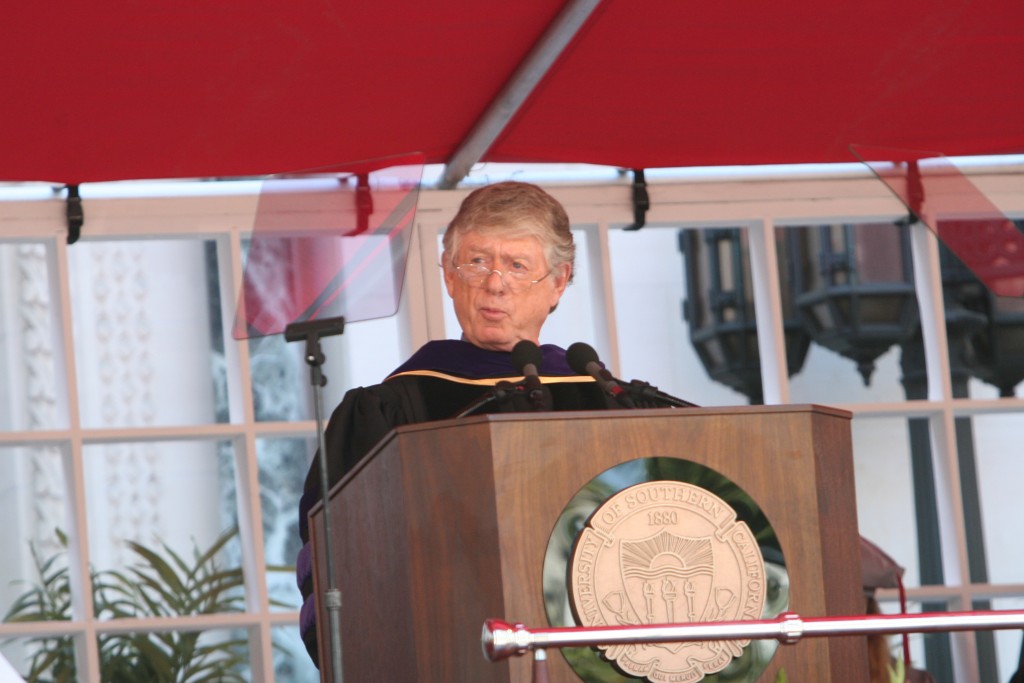 I was out here a few weeks ago—up north, in Solano—working on a documentary about California’s overcrowded prison system. On our last day, a young inmate walked up to me and said: “Must be great, huh? Being a celebrity an’ all. Lots of money. Betcha get to smoke a lotta weed.” And then: “What’s it like getting three women in the back of a stretch limo?”

I started to explain that my life was a little more conventional than that; but I was getting nowhere. So I called over my producer, explained that he and I had been working together for more than sixteen years and that he would tell him what my life was really like.

Tom confronted the issue directly. “You’ve got to understand,” he said. “Ted’s been married to the same woman for 44 years.” The kid looked at me with what I can only describe as a mixture of compassion and contempt: “Why would you do something like that?”

Why, indeed? If Fate has been considerate enough to deal you a hand that includes both celebrity and money, why in the name of Access Hollywood would you waste it on something as uninspired as a life-long commitment to another person?

A friend of our daughter, Deirdre, has written a book. It’ll be published in a few months and it will get a lot of attention. The author received a heart transplant almost twenty years ago. She may, in fact, be the longest-surviving heart-transplant patient in the country. Medicine’s miraculous gift to a young woman who would otherwise have died well before her 25th birthday. You know how authors like to pick a quote or two that they slip in right after the title page; something to set the tone? Amy chose a quote from the late H. L. Mencken, “the sage of Baltimore.” He was a journalist, satirist and social critic of great renown more than sixty years ago. Mencken was something of a misanthrope; but as long as you weren’t the direct target of his savage wit, he was funny as hell. He wrote, and this is the quote Amy picked to introduce her book: “It takes so little to make life unbearable: A pebble in the shoe, a cockroach in the spaghetti, a woman’s laugh.”

Whoa, Ted! I thought you said this was a book by a woman whose life, these past eighteen years, was medicine’s gift, a blessing of science? I did say the part about medicine’s gift. I even described it as miraculous; but that was my adjective. Amy would disagree. Hers has been an extremely difficult and painful life. So difficult… so painful that she has considered suicide more than once. If a “pebble in the shoe” can make life unbearable, a successful heart transplant, it turns out, can be infinitely harder to bear. It takes so long. We live, after all, in an age of instant communication and dwindling patience. Perhaps because we learn of everything so quickly it is only the rarest of tragedies that engages our attention over any length of time. That’s what made the scandal at Walter Reed Army Hospital possible. We like to celebrate our heroes quickly; and then get on with our lives, even if they can’t get on with theirs. To the degree that we linger over a disaster we require that it lends itself easily to caricature. Think… Anna Nicole Smith.

Tomorrow evening, I’m scheduled to speak to the Daniel Pearl Foundation. Yes, that Daniel Pearl; the Wall Street Journal reporter who was taken prisoner by Al Qaeda in Pakistan and then brutally murdered. To be perfectly frank, I didn’t want to do the speech. I’ve put Daniel Pearl behind me. His father, on the other hand, hasn’t – couldn’t; and he’s been asking me to do that speech over the past three years; and I didn’t feel that I could turn him down again. “It takes so little to make life unbearable: A pebble in the shoe…” Where does the murder of a son fit on that scale? What obligation do we have to acknowledge, if not absorb, even the tiniest fraction of another person’s pain? Most people, it turns out, have an almost infinite capacity to tolerate other people’s suffering. As long as it’s not permitted to intrude too directly on their own lives.

Mencken’s point, of course, is that the pebble in my shoe inevitably weighs more on the unbearability scale than your divorce or her cancer. It has the capacity to blot out the suffering in Darfur, the millions of war dead in the Congo; my pebble takes precedence over famine, epidemics and a wide variety of natural disasters; given only that they are not happening in my neighborhood. Indeed, we’ve been encouraged to view disaster through the wrong end of an emotional telescope. We demonstrate our solidarity with New Yorkers after 9/11 by wearing T-shirts emblazoned with the twin towers. We support the victims of Hurricane Katrina by attending a New Orleans Jazz Relief concert. We raise tens of millions of dollars for some ambiguous charities over two hours of institutional empathy, generated on American Idol. The late George Burns was once asked the secret of great comedy. “Sincerity,” he said. “If you can fake that, you got it made.” We have become specialists in the facile patriotism of tiny flags pinned to our lapels and yellow ribbon stickers pasted to the rear windows of our cars. We permit ourselves to be roused to the heights of righteous indignation by the spectacle of someone burning the American flag. Forgetting that you can safeguard freedom even as you violate its symbol. The danger lies in safeguarding the symbol, only to violate the freedoms it represents.

The war on terrorism, for example: A necessary and legitimate campaign. The threat is real; the danger that, some day, terrorists may use a biological, chemical or even a nuclear device against one or more of our cities, is unambiguous. But even as that danger was used to justify the invasions of Afghanistan and Iraq, the American public was being encouraged to pursue a normal life-style. Put the war behind us: Mission Accomplished. Although it wasn’t; still isn’t. There are, I’m sure, among you several people who have family members or close personal friends serving in Iraq or Afghanistan. For you, the war is a daily reality. The actual burden of the war is borne by the 170,000 men and women facing combat. But what about the rest of us? We pay no additional taxes to fund the war, we suffer no personal deprivation because of it. Where’s our sacrifice? We are not a nation at war. We are a nation in deep denial while our military is being depleted and exhausted.

Symbols are important; but only when they reflect reality. The reality of America today is an administration that proclaims a commitment to freedom and the Constitution, even as it whittles away at both in the name of security.

The reality of America today is an opposition party that bends to the wind of public opinion in pursuing the earliest possible withdrawal from Iraq, without ever acknowledging the cost to the region and the inevitable impact that this will have on U.S. interests.

The reality of America today is an administration that considers political loyalty to the President an adequate substitute for experience and competence.

The reality of America today is a political system that is so heavily mortgaged to special interests and so dependent upon hundreds of millions of dollars in contributions that the actual interests of the oft-invoked American public are lost in the shuffle.

The reality of America today is 47 million people without health insurance; two million men and women in prison – most of them for drug related crimes.

The reality of America today is a business community so intoxicated by stock prices and the Dow Jones Industrial average that it confuses quarterly earnings reports with the long term health of a company and its employees.

Oh… and let us not forget my colleagues and me… who make up the media. We are more diverse, more fragmented than we have ever been. The tools of our trade, the microphones, the cameras, the printing presses, are—by virtue of the Internet—more accessible than ever before. Everyone and anyone can communicate to the world. Although much of what is communicated on the Internet undergoes very little vetting; in some cases, no editing at all. Fact and fiction, truth and lies, libel and slander – all but uncontrollable; in that the Internet, designed long ago to survive even a nuclear holocaust, is, by definition meant to be uncontrollable. As for the media giants, the networks, the urban dailies, the news magazines, they have been largely absorbed by even greater behemoths; mega-corporations whose interests I referenced moments ago – Dow Jones… quarterly earnings.

And yet… every once in a while I attend an awards ceremony for one or another aspect of the communications industry; and it never fails: I am blown away by the excellence, the sheer brilliance of many of the entries. And what’s true of my industry is true across the board: Businessmen and women who swim against the tide; create new products and benefits, who put the interests of their workers and customers if not ahead of their own then at least equal to their own.

Because I am a journalist, I have access to people I would otherwise never meet: Supreme Court justices; remarkable, profoundly caring people. Congressmen and Senators: Bright, hard-working men and women, dedicated to the welfare of their constituents. Over the course of nearly fifty years in this business, I have covered more than a dozen wars. I’ve spent more time than my family was meant to endure, in combat with American troops. This military, now, battered and bruised, stressed and overtaxed as it is – the best I’ve ever seen. The mid-level officers, in particular, the captains, majors and lieutenant colonels – truly first class.

So, what’s happening? On average, America’s in deep trouble. Our image around the world more tarnished than it’s ever been. Our political and economic systems suffocating under the imperatives of raising campaign funds and meeting quarterly earnings projections. Our health and educational systems buckling under the weight of imposed mediocrity. On average, things are not good. But remember what Mark Twain said about averages: “Take a man and put one of his feet in a bucket of ice and the other foot in a bucket of boiling water; and, on average, he’s comfortable.”

The great gift of America is that, for all its faults, it preserves opportunity for the individual: The individual politician, entrepreneur, social critic, architect, scientist. The man or woman who chooses not to go along with the crowds. It is not an easy path. Most of you will not choose it. But it’s there, it’s open to you; it’s available. And if you take that path, our structure of laws and freedoms and protections, makes it less than likely that you will be imprisoned, or abused or killed because you did it.

In that sense, America has been blessed.