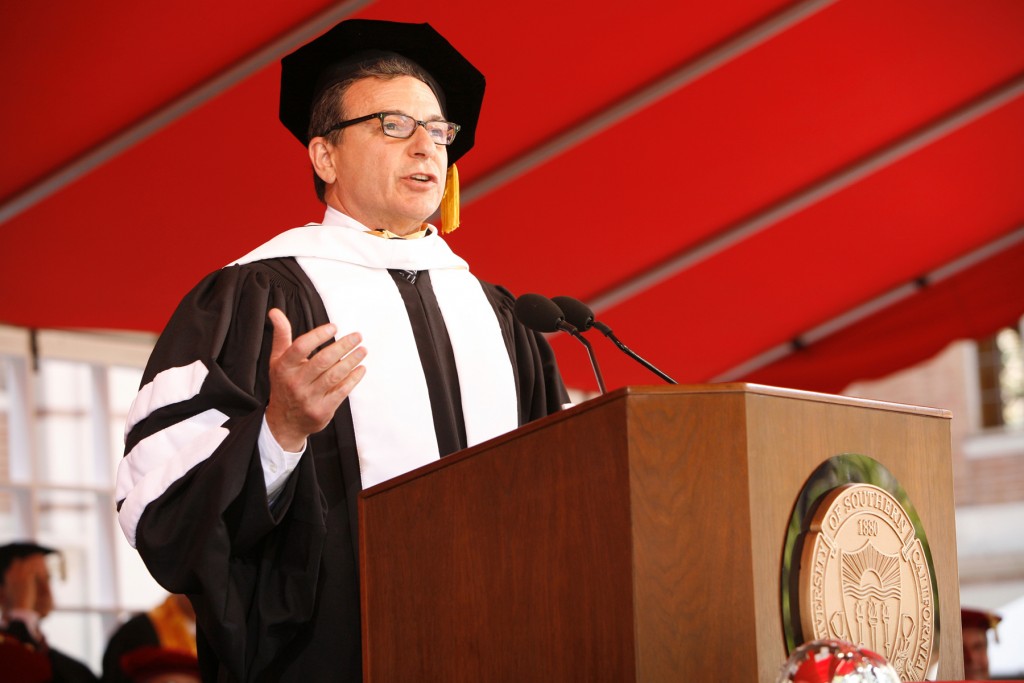 Thank you. It’s an honor to be here as part of the 125th USC commencement ceremony and to receive this honorary degree.

I want to start by saying congratulations to the class of 2008. You’re the reason we’re all here. Everything we do here today is to honor you and celebrate your great achievement – earning a degree from this fine institution.

Being this close to Hollywood, I’m sure a lot of you were expecting a celebrity to give the commencement address. Well, for those of you who were secretly hoping for George Clooney, I’ll just say that Disney is a very big company, and we’re hiring! As far as I know, George isn’t!

I know graduation feels like the end of a great ride, but it’s really just the start of the most exciting ride in the world. As a guy who knows a little something about thrill rides, you can trust me on this. It’s about to get really interesting… maybe a bit scary… and truly exhilarating all at the same time. And the best part is, you get to design it yourself. In Disney-speak, you get to “imagineer” your own life, and build a ride that is uniquely your own, created by your talent, shaped by your dreams… limited only by your own ambition and effort. When you think about it, that’s an unbelievable opportunity.

This week, lots of people like me are taking the stage at universities across the country to share some experiences… and hopefully a bit of wisdom. I feel pretty certain that the subject of character, particularly the importance of character, will come up in a lot of those speeches. I’m not going to spend a lot of time on it today, but I have to mention it, because character, more than anything else, will define the life you build. At Disney, we spend a lot of time thinking about character… and even more time talking about it. But for us, when we talk about character, it has a whole different meaning. You know… Mickey and Donald… Winnie and Tigger… Buzz and Woody… Jack Sparrow… and these days, Hannah Montana. So we know the value of characters, but we also know the value of character, and it’s something we look for in everyone we work with.

Warren Buffett is fond of saying that when you hire someone, you should look for three things: brains, talent, and strength of character… and if the person you’re hiring doesn’t have that last thing, then look out, because those first two will kill you! Great advice. Make sure every action you take, every word you speak reflects your real character and demonstrates your integrity.

I stood at my college graduation 35 years ago today. And, as I reflect back on that day, there are just a couple of things I wish I knew then… so I thought I would share them with you today.

When I started out, I wish someone had told me that everything that came after graduation was up to me. I knew no one was going to hand me anything just for the asking. But I wish I had realized no one could stop me either… as long as I believed in myself and in the value of what I was doing. Fortunately, my career provided plenty of opportunity to learn that on my own.

Now, I don’t have much to complain about. After all, I wound up with one of the coolest jobs in the world. I spend a lot of time in some amazing places and with some incredible people. I get to manage characters that are beloved by millions, test new theme park attractions, and help design new hotels. I get to watch TV pilots, screen new movies, and experiment with all kinds of new technology before it hits the market.

I’m always amazed when people ask me if I’m having fun. You’ve got to be kidding? I ride rides for a living! It really doesn’t get much better than being “Chief Mouse” at Disney. And it only took me 35 years… or about 12,500 days to get here! That’s sounds like a very long ride, but it has flown by.

When I graduated, I had one great ambition. I wanted to be a network news anchor. That was an even bigger deal back then. Before cable news and the internet, people relied much more on network news to tell them what was going on in the world. And in the era of Vietnam, Watergate, and moon walks, there was a lot going on.

I started off my quest by landing my first job as a local weatherman in upstate New York. The weather in that part of the world is horrible and often very unpredictable. So if you’re a weatherman, you’re either giving people bad news or the wrong news. And I delivered my share of both. I had lots of drive and ambition, but as it turned out, I didn’t have the right kind of talent required for the job. So I failed… pretty miserably, as I recall.

Even though I no longer believed in my future on television, I still passionately wanted to be in television. So I decided on a career as a television producer. I was lucky enough to get a job as a production assistant at ABC working on soap operas and game shows… and paying my dues with days that started at 4:00 a.m. and duties like fetching coffee for soap opera divas who weren’t exactly “morning” people. But, I was having fun and really learning a lot, and I thought I was doing a pretty good job. Unfortunately, my boss, Dave, had a different opinion. About a year into it, he called me into his office and said, “Bob, you’re not promotable. Either find another job in two weeks, or I’m going to fire you.”

So, two years out of college, I’d already had two jobs. I failed at one and had just been told I wasn’t any good at the other. The humility gene was just starting to kick in, a valuable, yet painful feeling, but at 25 and nothing else to do, I wasn’t about to give up.

So, I set out to prove myself in another part of the business and I landed a job at ABC Sports, and broke my losing streak. I spent the next 13 years traveling around the world covering every kind of competition you can imagine, from wrist-wrestling in Petaluma to ping pong in Pyongyang. I also got to program ABC’s Wide World of Sports… and work on six Olympic Games, Monday Night Football… and Muhammad Ali fights. I covered the best of the best in the world of sports. You know: …the thrill of victory and the agony of defeat! Of course… NOTHING was better than covering a great USC football game.

I did well in network sports. And my new bosses at ABC thought I was promotable after all. They made me head of ABC Entertainment… where I brought the world TV programs of great cultural significance… like Full House and America’s Funniest Home Videos! Yes, I am the one responsible for introducing the Olsen Twins to the world!

We also pioneered User Generated Content. America’s Funniest Home Videos was started in 1989! …way before anyone dreamed of YouTube! We were definitely ahead of our time!

In any case, I was eventually named President of ABC, with news, and entertainment and even ESPN reporting to me! Not too bad for a guy who wasn’t promotable!

I was at the pinnacle of my career… Then, Disney bought ABC… and I became just one of the company’s 130,000 employees. A lot of people would have seen that as the end of a pretty good run. But, I saw it as a whole new world of opportunity. Disney was a much larger company, with more room to grow, and that was really the first time the notion of actually running The Walt Disney Company crossed my mind.

So, I stuck around, worked hard and progressed to the point where becoming CEO was actually possible. However, some people had a different opinion. This time, instead of having one guy say I wasn’t promotable, I literally had hundreds of people saying it, and quite publicly I might add. It was a very public succession process, with naysayers that included major newspapers and business publications!

But here I am… from weatherman to chief mouse… in just 12,500 days! It has been an incredible journey for me, and the lesson of my life is pretty simple. It’s not what people say about you that matters, it’s what you believe about yourself.

You define who you are. And when you truly believe in what you’re trying to do, and in your ability to do it, adversity becomes just something to overcome… and skeptics can be ignored… or better yet, proven wrong.

Odds are you’re going to run into a few doubters along the way. I had my share of them! But, have enough faith in yourself to defy them. Have enough patience to prove them wrong. When it comes to your abilities, your passion, and your commitment, their opinions don’t matter. Yours does!

I’m often asked: If I had the chance, would I have done anything differently? Now, I obviously wouldn’t want to change much, because the end turned out just fine, but there is one other thing I wish I’d known when this incredible ride first started… And that’s the simple fact that time really does fly. When you’re 21 or 22, with your whole life ahead of you… you really do think you have an endless supply of time. At my own graduation, I thought I had all the time the world. Today, I’m amazed at how much time has passed… and how fast it went by.

And remember… mine sped by in analog. Yours is in digital! It will move even faster! If I appreciated this back then, I would have figured out a way to play more. I would have had more fun. I would have been more patient. I would have savored everything that much more.

Maybe it’s no surprise coming from a theme park guy, but my way of saying smell the roses is: “ride all the rides!” Take it all in. Don’t just look at where you’re going. Look left and right and up and down and all around you. Listen and smell and feel everything about your life.

Be present.
Love your work.
Love your friends and family.
Love your life.
Love your time… because it goes fast… and you can’t get more of it.

That’s my simple message today. Have faith in yourself. Believe in yourself and what you want to do, and enjoy yourself along the way. Love your time!

At Disney Parks, our guests are welcomed with a simple greeting: “Have a Magical Day!”

So I’m going to close on that note.

I hope you truly appreciate how magical this day is… and the thrill ride of your life is ahead of you!

Thank you and congratulations.